Wilmington Honors Fred T. Johnson—Tuskeege Airman,
Educator and an Important Part of Delaware’s History
Mayor Purzycki said a permanent memorial to Mr. Johnson’s life has been placed at Warner School so current and future generations will appreciate his life story 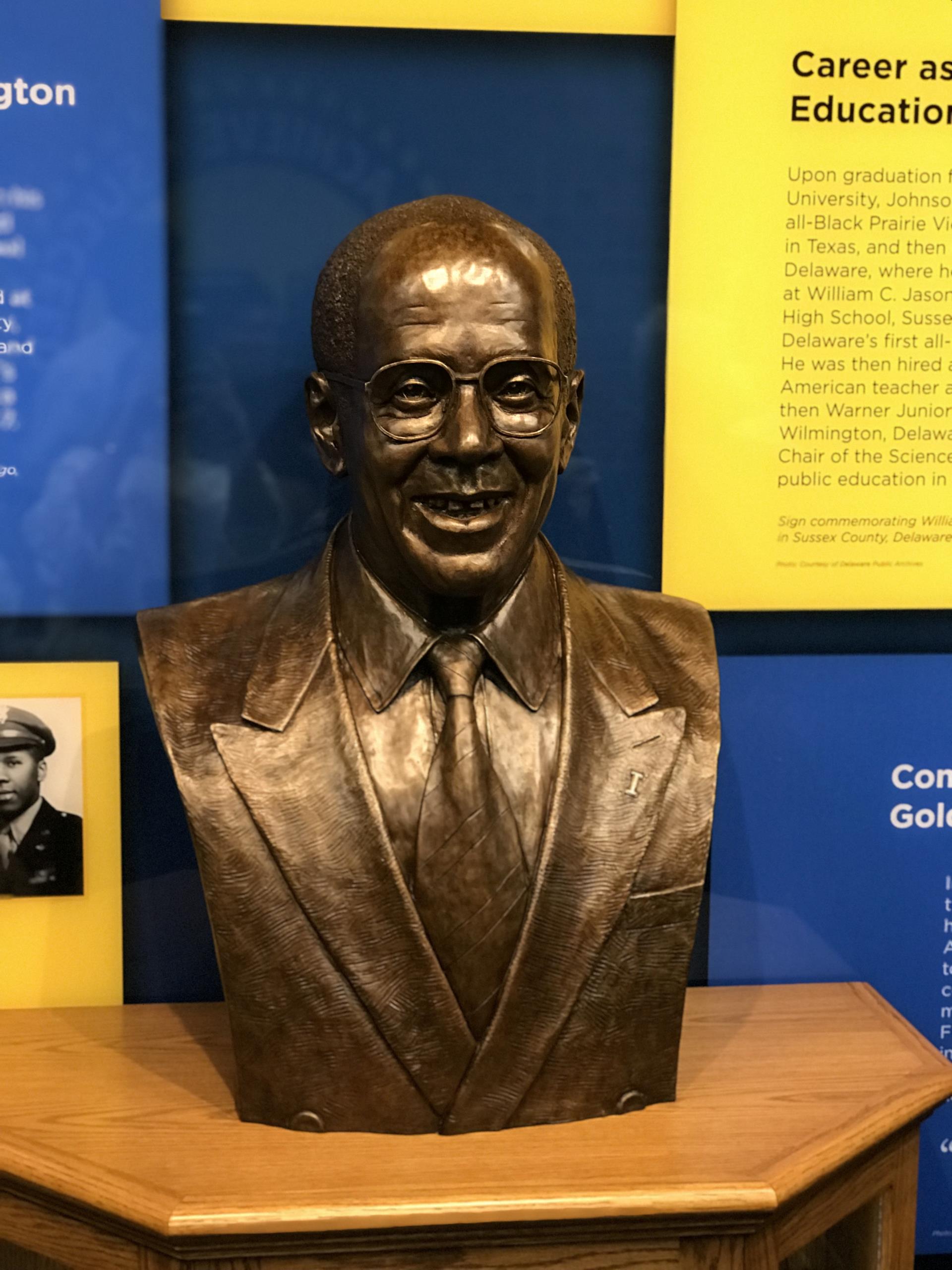 Mayor Michael Purzycki and City Cultural Affairs Tina Betz joined last night with officials from the Red Clay Consolidated School District to unveil a permanent exhibit honoring the life and accomplishments of Delawarean Fred T. Johnson. The exhibit, consisting of a bust of Mr. Johnson and a wall memorial, has been erected at the Warner Elementary School on West 18thStreet. It is at this school, which was previously known as Warner Junior High School, where the former Tuskegee airman became the school’s first African American teacher and Chair of its Science Department.

“Fred Johnson is an icon of African American history, here in Delaware, and in the United States,” said Mayor Purzycki.  “His life spanned a period when the country was growing and progressing in its self-identity. His choices and sacrifices culminated in numerous contributions in sports history, military integration, educational equality and service to City and country.”

The Mayor and Tina Betz today thank the bust artist, Brad Vanneman and the graphic designer, Caroline Chen, for creating such a wonderful tribute to Mr. Johnson and for working with his wife, Margo Johnson, and his family on its accuracy and information.

About the life of Fred T. Johnson:

Born in Bloomington, Indiana in 1924, Mr. Johnson moved with his parents and three siblings to Delaware. He graduated from Delaware’s only all-Black high school – Howard High School — where his father was principal for 35 years.  Mr. Johnson went on to study pre-med at Indiana University, in his hometown of Bloomington.  In 1943, his junior year, Johnson voluntarily left his university studies to join the Army Air Corps and volunteered to become a Tuskegee Airman – the only elite and all-black aerial-trained combat group, which fought in World War II.

After his service to the country, Johnson returned to Indiana University to complete his undergraduate degree.  During that time, he flourished as a premier talent in track and field.  Johnson was a member of Indiana University’s Championship Shuttle Hurdle of America team, which won the Penn Relays in 1947 and became the fastest team in the world at that time. His love of the sport propelled him go on to coach and train championship track teams throughout his life.

Upon graduation from Indiana University, Johnson taught Physical Education at all-black Prairie View A&M University in Texas, before returning to Delaware, where he taught science at William C. Jason Comprehensive High School, Sussex County Delaware’s first all-black high school.  Later, he was hired as the first African American teacher at what was then Warner Junior High School, in Wilmington, Delaware.  Johnson ascended to the Chair of the Science Department there before retiring from public education in 1981.

In 2013, Fred Johnson was awarded the Congressional Gold Medal for his military service as a Tuskegee Airman, his significant contributions to public education, and for his community service as a lifelong member of Kappa Alpha Psi Fraternity, Inc., where his father was the first pledge. He was also included in the Tuskegee Airmen’s section on the Wall of Honor at the National Air and Space Museum and in 2016 was further recognized as an inductee in the Delaware Aviation Hall of Fame. 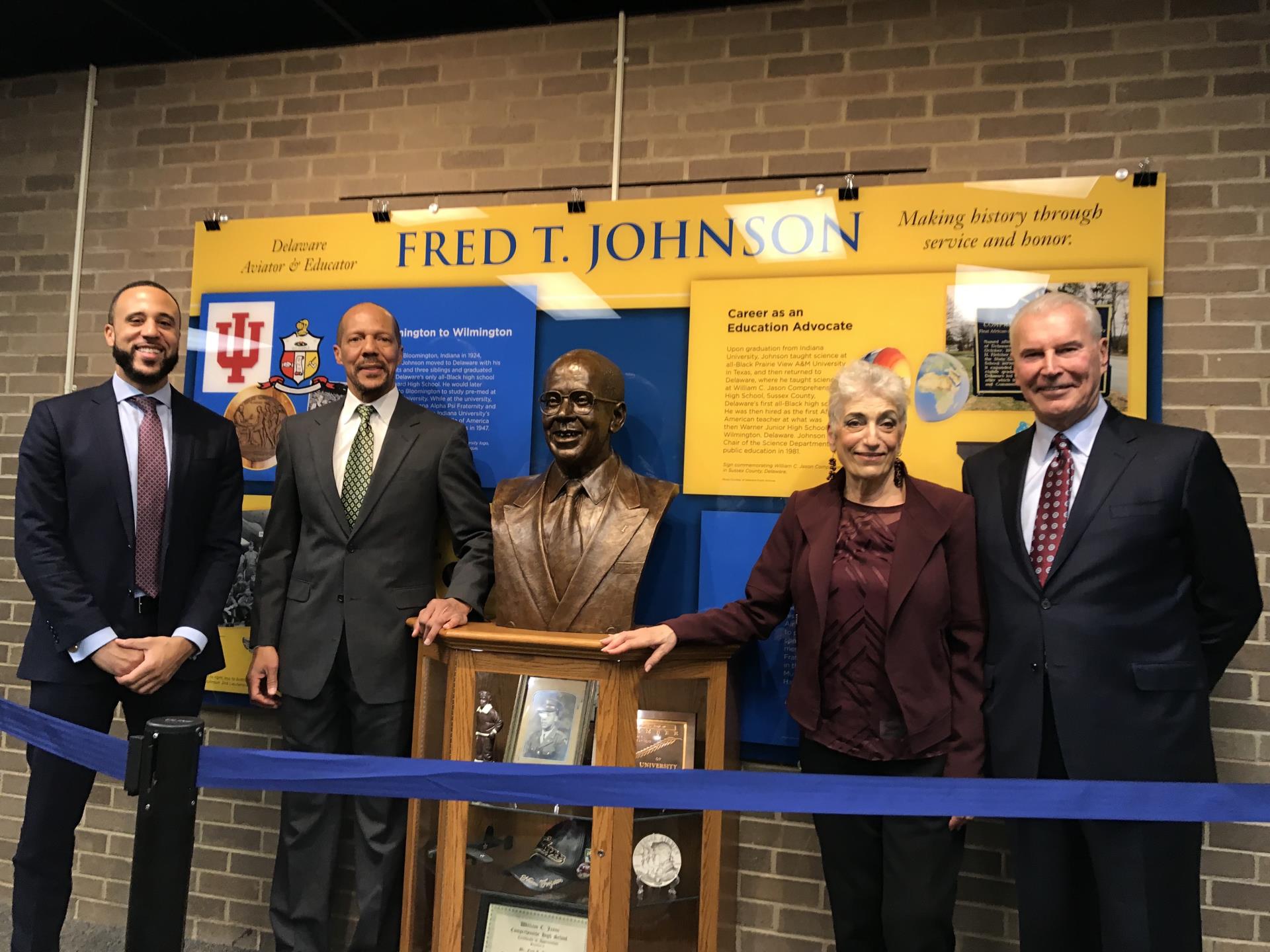