ConnectWilmington begins this month with the installation of 215 LED street lights and 50 smart sensors in West Center City, and along North Market Street, Washington Street and Baynard Boulevard 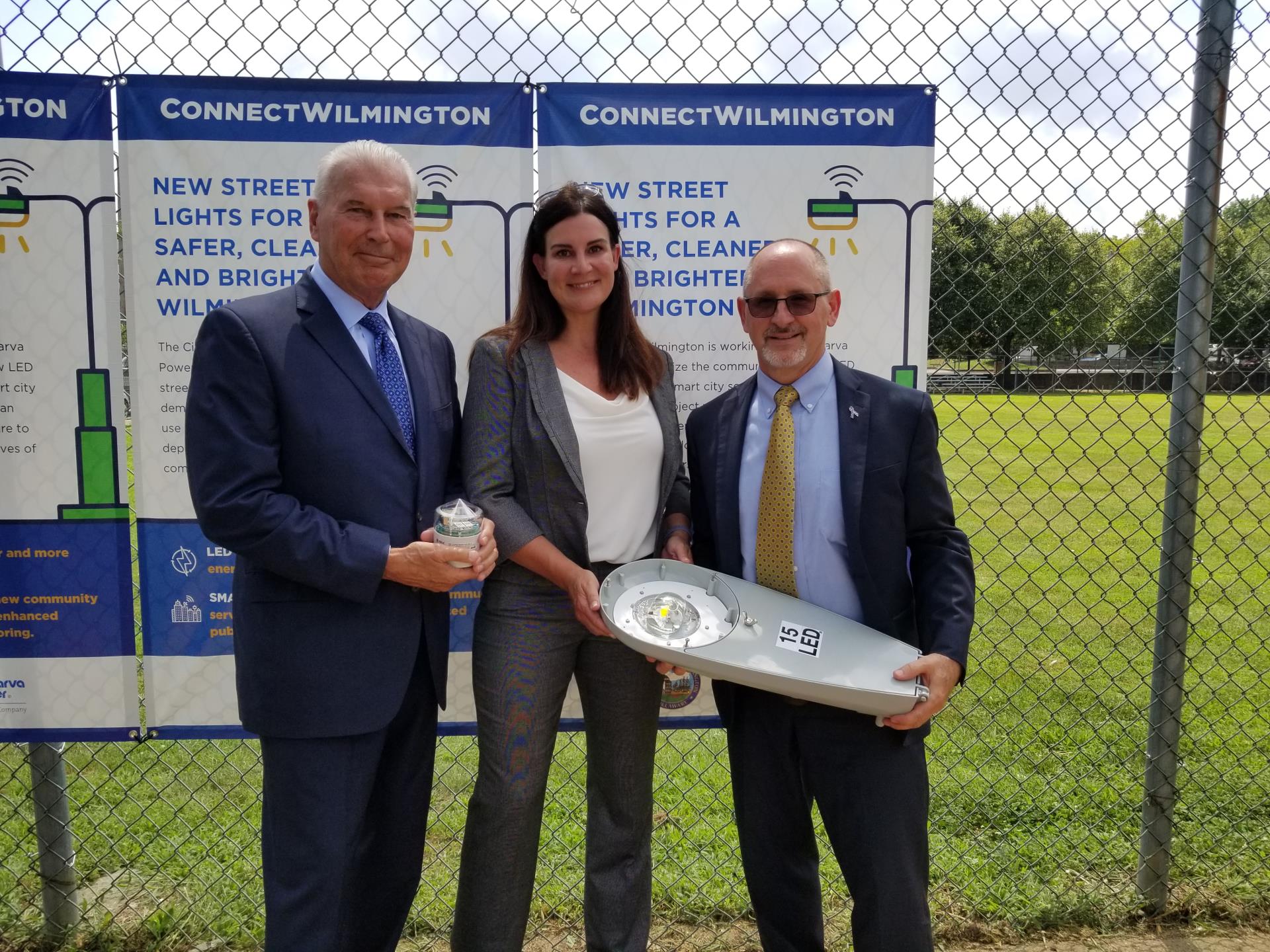 Wilmington Mayor Mike Purzycki and Delmarva Power Region President Gary Stockbridge today announced a joint demonstration project entitled ConnectWilmington during which new LED street lights and smart sensor technology will be installed in selected areas of Wilmington to begin the process of producing a brighter, safer, cleaner and technologically advanced City. Mayor Purzycki said he is most appreciative that Delmarva Power will manage this initial demonstration project. He said his Administration’s ultimate goal is to convert all 7,050 street lights in Wilmington—1,750 owned by the City and 5,300 by Delmarva Power—to LED lighting, thus opening the door to smart, sustainable technology throughout the City.

The Administration has legislation pending before City Council that would enable the City to borrow $2.1 million from the Efficient Energy Investment Fund (EEIF) administered by the Department of Natural Resources and Environmental Control (DNREC) to install LED lights on all of the City-owned light poles. It is estimated that the City will more than cover the cost of the 20-year loan through expected annual energy savings of at least $150,000. The City would also receive a $175,000 grant from DNREC to assist with the LED project.

ConnectWilmington—which represents phase one of the citywide LED lighting plan—is beginning this month as Delmarva Power, at the City’s request, converts 215 existing street lights to LED and activates 50 smart sensors and various smart city technologies. Delmarva Power is funding the smart sensors and smart city technologies, as well as their installation, to test their functionality, operations, and potential value for Wilmington and other communities the company serves.

The demonstration project is occurring in West Center City and along stretches of Washington Street, Baynard Boulevard and North Market Street near Brandywine Village. A joint letter from the City and Delmarva Power addressing the LED lighting project has been mailed to residential and business property owners near the demonstration areas to explain more about the joint effort.

“Wilmington is becoming a smarter City and we are preparing ourselves for what promises to be an exciting and challenging future dominated by ever-expanding technology and the collection and use of data,” said Mayor Purzycki. “LED lighting will give the entire City a new look and feel and it will add to our improving public safety efforts, but I believe it can also make us a more cost-efficient and fiscally responsible City that serves citizens better and makes the City better overall.”

“Smart city technology presents a tremendous opportunity for us to collaborate with municipal partners to create new energy choices and power a cleaner and brighter future for our customers and communities,” said Delmarva Power Region President Gary Stockbridge. “This demonstration project is a launching pad for new smart city initiatives across the region and we are excited to work with the City to better understand how improve quality of life in the communities we serve.”

The Mayor and Stockbridge said smart city technologies and sensor-based technologies could offer an exciting array of services for Wilmington, which might include:

They said smart city street light sensors can also connect to other utility providers and public services, such as water and waste management, helping improve municipal services and operations. And, they noted, the new technology can make neighborhoods safer because smart LED street lights will improve the reliability and quality of the lighting to reduce poorly lit locations that criminals prefer when engaging in illegal activity.

Mayor Purzycki and Stockbridge agreed that new technology is vital to creating a more sustainable community because the use of smart LED street lights helps communities lower their carbon footprints. Smart LED street lights deliver greater energy efficiency and cost savings by consuming about one-third of the energy used by traditional street lights. They can reduce energy consumption for street lighting by 40 to 50 percent, while efficiencies provided by lighting controls can save an additional 20 to 30 percent. LED lights are also more durable and can last up to 10 times longer than traditional bulbs. 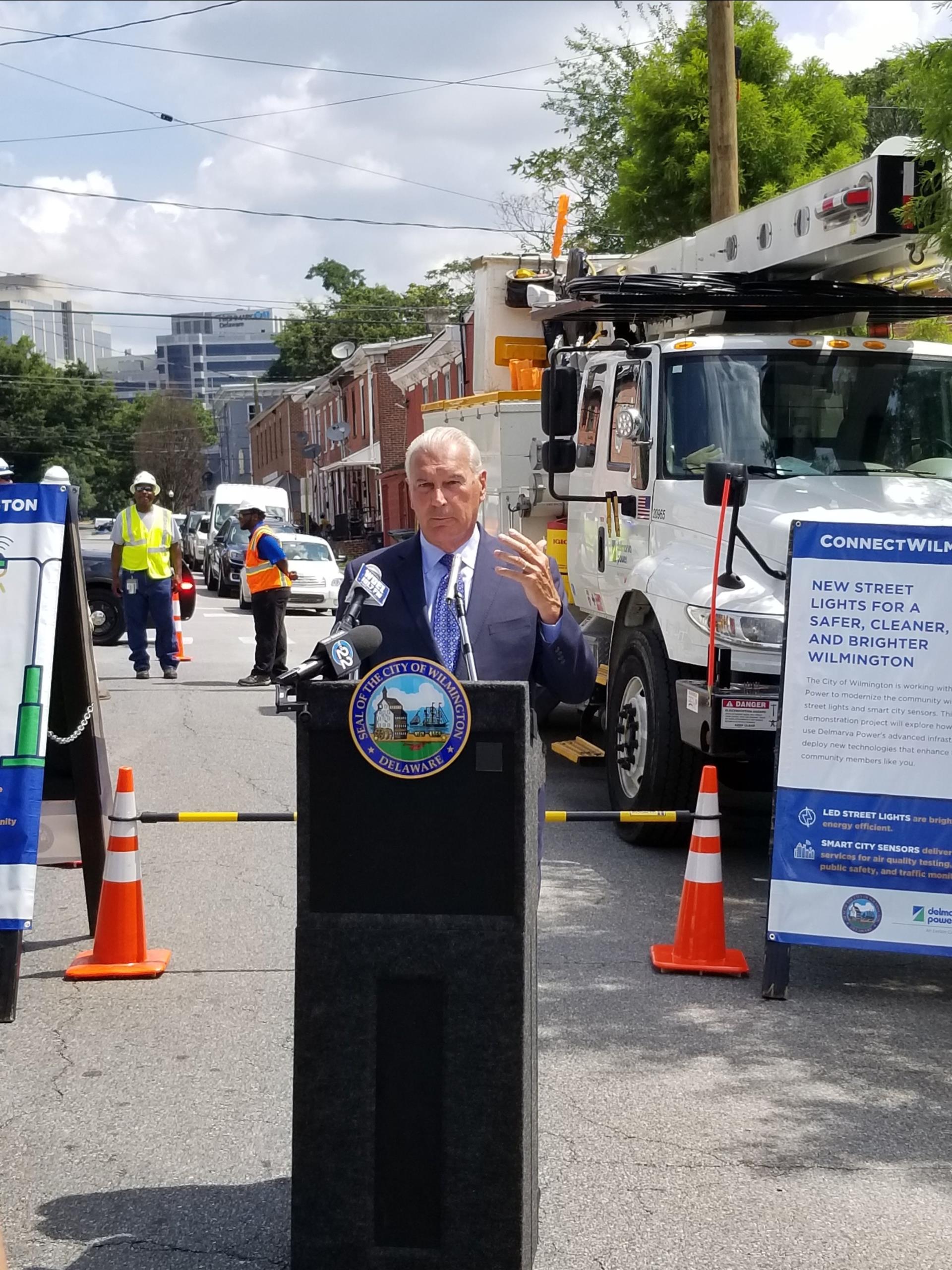 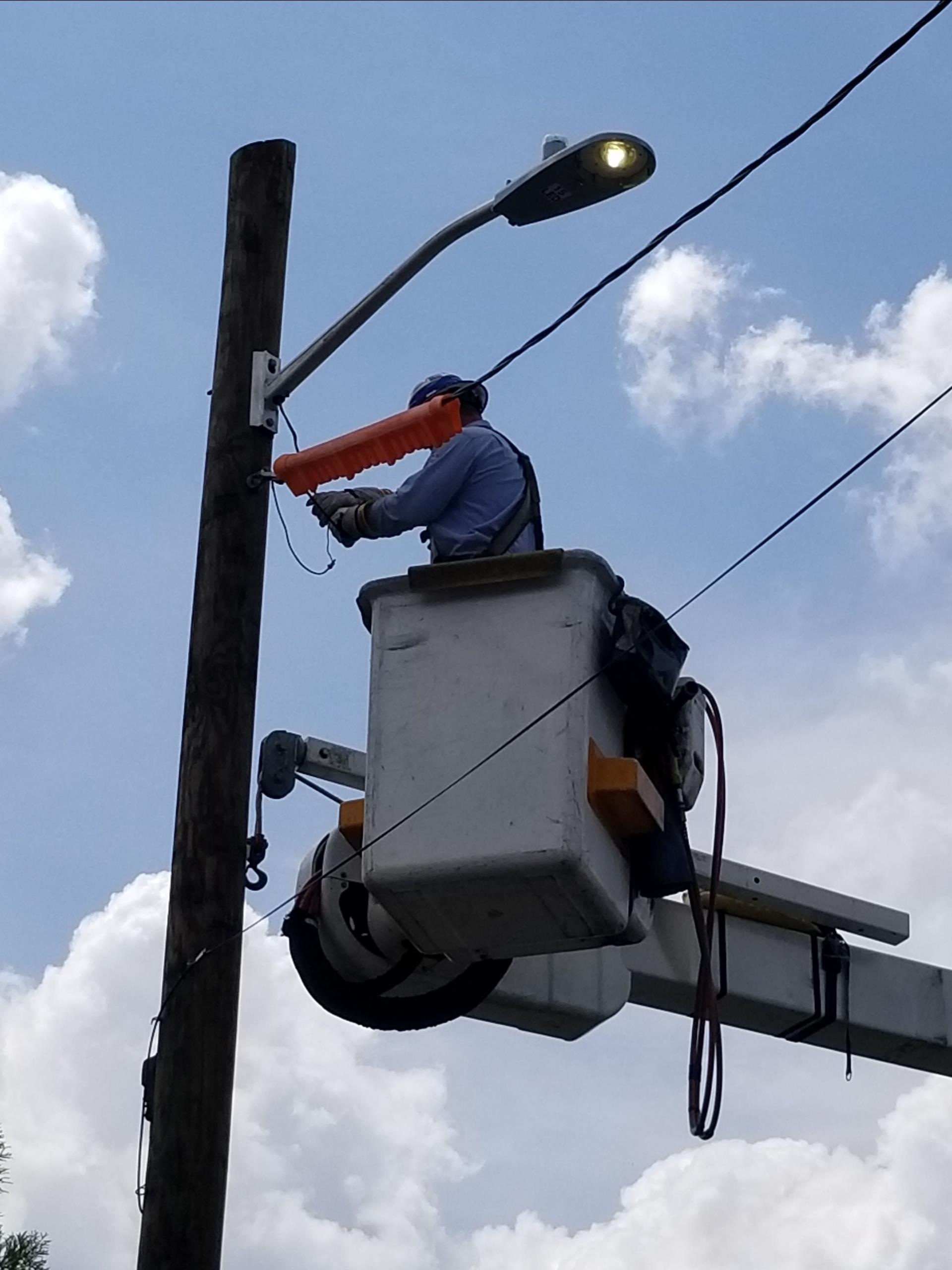 A big thank you to the Delmarva team that is installing new LED street lights around the City.