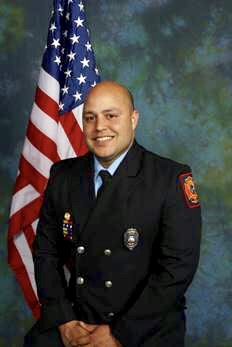 Wilmington Mayor Mike Purzycki and Fire Chief Michael Donohue are pleased to announce the appointment of Gabriel M. Pabon, Jr., as Wilmington’s newest Fire Marshal. Pabon, a 20-year veteran of the department, became a firefighter on August 2, 1999, after graduating from the 32ndWilmington Fire Academy.  He rose to the rank of Lieutenant in 2011 and was promoted to Captain in June of this year. On July 31, 2019, Pabon was appointed to the rank of Deputy Chief for Fire Prevention.

Pabon, a married father of three boys, is a resident of Bayard Square and currently serves as president of the Bayard Square Neighborhood Association.  He is a veteran of the United States Marine Corps (USMC) and, as is required of all fire investigators in the City, graduated from the 88th Wilmington Police Academy in 2004 and is a Certified Law Enforcement Officer.

“We are very pleased to have Gabriel leading the City’s Fire Marshal’s Office,” said Mayor Purzycki. “During a highly decorated career with the Department that has spanned more than two decades, Gabe has accumulated a wealth of experience – including having served in the Fire Prevention Division as a Fire Instructor, Plans Examiner, and Inspector/Investigator – that makes him eminently qualified to carry out the Office’s mission, namely enforcing fire safety codes and standards, conducting public education, and investigating the cause and origin of fires occurring within the City of Wilmington. Congratulations to Chief Donohue for continuing to build a solid command structure under his direction.”

About the Fire Marshal’s Office
According to the City Code, Wilmington’s Fire Chief is required to provide fire protection for the City of Wilmington. In addition to firefighting, fire protection includes a wide range of fire prevention measures including the formulation and adoption of fire codes, inspections to ensure compliance with the codes, investigations to determine the origin and cause of fires, and education to the public regarding fire safety. The Fire Prevention Division, also known as the Fire Marshal’s Office (FMO), is responsible for carrying out these duties for the Fire Chief. The Fire Marshal’s Office is under the direction of the Deputy Chief of Fire Prevention who serves as the City’s Fire Marshal. The Fire Prevention Division is responsible for developing and implementing special fire safety programs. The specialty programs are designed to promote public fire safety messages and to provide a positive department presence in the community. The Public Safety Specialist works with educational facilities, daycares, and community organizations to spread the message of fire safety to the citizens of Wilmington. The FMO Office also manages a smoke detector and CO detector program which provides smoke detectors and CO detectors free of charge to homeowners in the City of Wilmington.