“The long-overdue renovation of Rodney Square has begun and I am most appreciative to the Governor, General Assembly, and our project partners that this grand public square will not only be restored to its original glory, but will be improved in a way so that it’s upkeep will be more manageable and economical. When this is completed, the square will be more beautiful, attractive and useful. The partnership that has enabled us to begin this revitalization effort is doing this to preserve historic Rodney Square for the entire community and for future generations.”

“I’ve called the City of Wilmington home for 30 years, and it’s clear that the success of our largest city is directly linked to our success as a state,” said Governor Carney. “This is an investment in the center of Wilmington to revitalize Rodney Square, attract new jobs and business to our city, and give all Wilmington families more options to get outside and enjoy everything our city has to offer. Across Wilmington, we’re making investments in neighborhoods, in city schools, and critical infrastructure to help make sure that all Wilmington residents see and feel the benefits of Wilmington’s success. We’re pleased to support this effort.”

The multiple-phased public and privately-funded renovation project will include new masonry and paving, improved irrigation systems, upgraded lights and electrical system, lighted fountains, planters, benches and tables, trash and recycling collection bins, as well as new trees, shrubs and green areas. The new square is also being designed to accommodate a wider range of smaller community events in addition to the more traditional larger events staged at the square. Improved accessibility to the square and more community-based activities are the primary goals of the renovation project.

Today’s announcement includes renderings of the future Rodney Square so citizens have a better understanding of the improvements that are planned, as well as a link on Wilmington’s OpenGov website of still and video images of what is planned for the new Rodney Square, found here.

Financial support for the estimated $4 million cost of the first phase of the Rodney Square project is being provided by the City of Wilmington ($1.5 million) and the State of Delaware ($1.8 million), as well as by Bank of America, Chemours, M&T Bank, the Wilmington Library, the law firm of Young Conaway Stargatt & Taylor, the law firm of Richards, Layton & Finger, the Buccini Pollin Group, and by members of the Rodney Square Conservancy Board of Directors.

The Rodney Square Conservancy has retained the services of two landscape architectural firms—Robinson, Anderson, Summers, Inc., and OLIN—to complete a revitalization study of Rodney Square. Fundraising by the Conservancy will continue in order to support the next phases of the project. Governor Carney and Mayor Purzycki today thanked the companies and organizations that have already contributed and urged other local businesses to consider becoming part of the new Rodney Square.

Rodney Square was one of the first examples of the City Beautiful Movement of the early 20th century, which espoused improving the social order of the day by introducing more beauty into the urban landscape. In 2011, Rodney Square, the Caesar Rodney equestrian statue, and the Nemours Building were placed on the National Register of Historic Places. 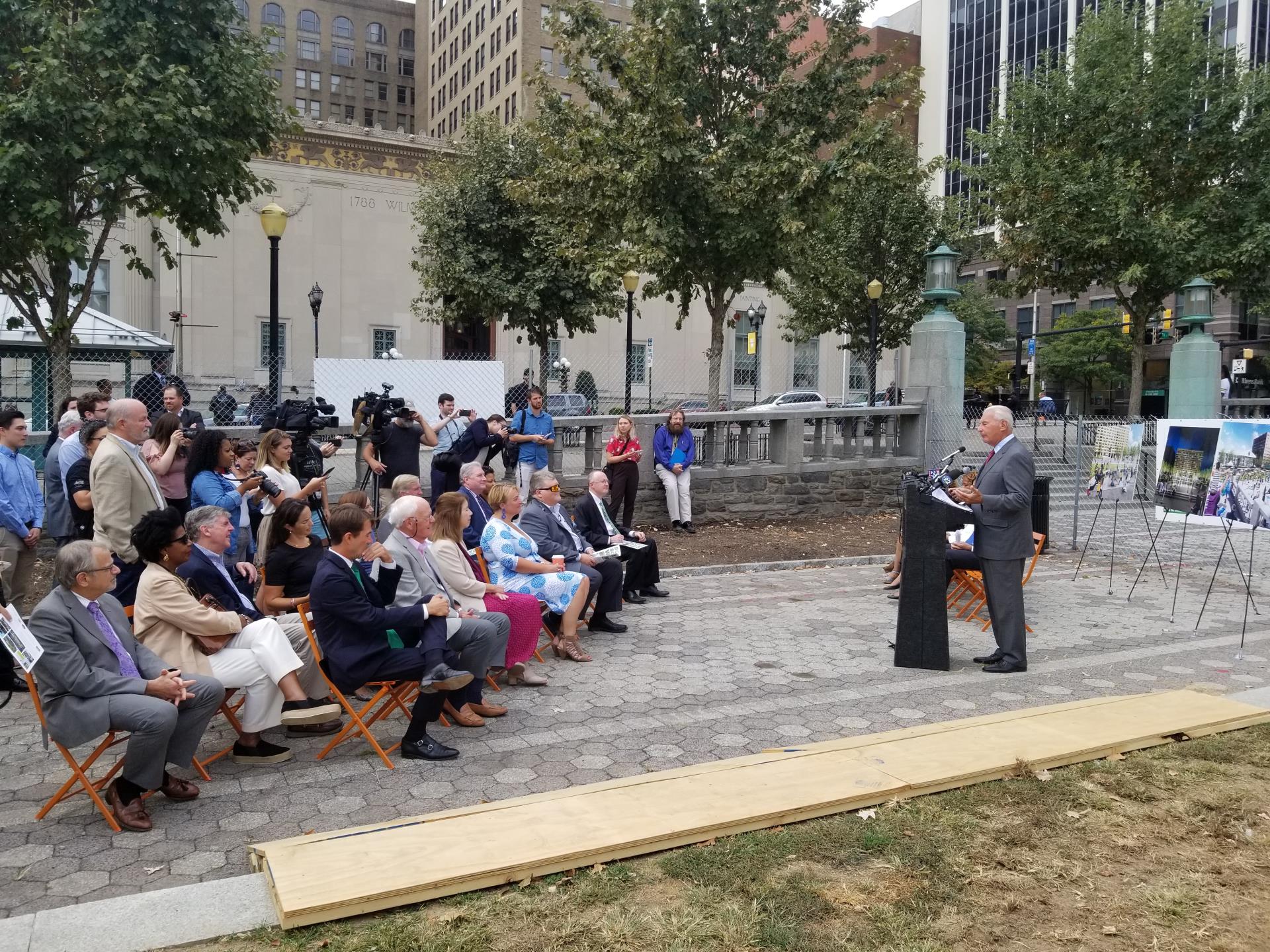 An artist's image of a renovated Rodney Square, looking west from King Street.