Mayor Purzycki Comments on the Sentencing of the Person Responsible for a 2016 Fire That Caused the Deaths Firefighters Christopher Leach, Jerry Fickes and Ardythe “Ardy” Hope 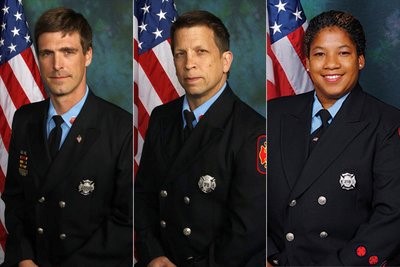 Mayor Mike Purzycki today issued the following statement on the sentencing of the person responsible for setting the fire that claimed the lives of Wilmington firefighters Lt. Christopher Leach, and senior firefighters Jerry Fickes and Ardythe “Ardy” Hope – and injuring others in September of 2016:

“The tragic loss suffered by our extended Wilmington family in September of 2016 has left a wound that that will never completely heal. Christopher Leach, Jerry Fickes, and Ardy Hope gave their lives in service to our City while doing a job that they loved, and we will be forever indebted to them for their ultimate sacrifice. While much of life as we knew it before that tragic day will never return to ‘normal,’ today’s sentencing will hopefully bring some solace to all who knew and loved these three heroes while also serving as a reminder of how fragile and precious life is. No punishment for the perpetrator can relieve the pain or sense of loss felt by the families and the community of firefighters. It is not up to us to judge—judgment is reserved for our Maker. It is up to us to find light where there was darkness and pray for the families. On behalf of everyone in our City and beyond, I express sincerest condolences to Fire Chief Mike Donohue, to the Leach, Fickes, and Hope families, and to all of the dedicated men and women of the Wilmington Fire Department who serve this City with distinction day in and day out.”

In a ceremony in 2017 marking the one-year anniversary of a house fire that killed the three Wilmington firefighters, Mayor Purzycki signed a Mayoral Executive Order declaring September 24 of each year a Day of Remembrance throughout Wilmington. The Mayor said this date should be an annual commemoration of the heroic and ultimate sacrifice made by three brave City firefighters, as well as an opportunity for citizens to say thank you to all first responders who routinely place their lives in jeopardy to serve citizens.