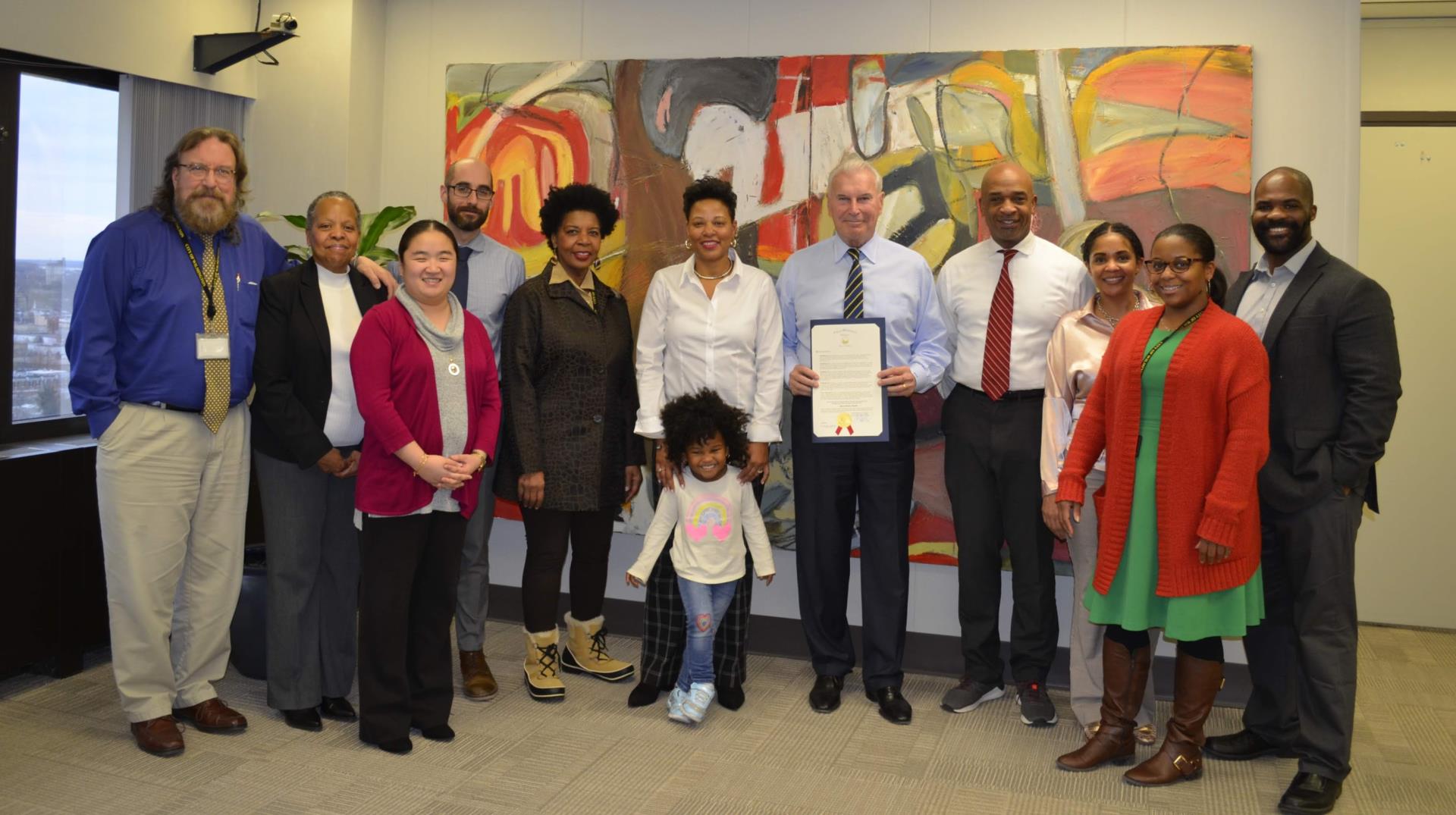 Mayor Purzycki, together with members of the Mayor's Office staff, holds the Proclamation he signed today declaring February as Black History Month in Wilmington.

Mayor Mike Purzycki today signed a Proclamation declaring February as Black History Month in Wilmington. The Mayor’s Proclamation urges City residents to celebrate and reflect on the rich, diverse heritage and culture in Wilmington and urges residents to make greater strides toward creating a society that is more just, peaceful and prosperous. The month will be marked by various recognitions of African American achievements locally and worldwide.

Mayor Purzycki said although Black History Month is officially celebrated just during February, it should be a year-round effort to recognize achievements of African Americans who have contributed to a better City, nation and world. “Some of these achievements have not or may never make it into a history book while other accomplishments may have been forgotten and simply lost to history,” said Mayor Purzycki. “Either way, we owe it to each other, regardless of our background or the color of our skin, to talk about and celebrate the extraordinary achievements of African Americans. Above all,” the Mayor added, “African American history is American history.”

Throughout the month of February, the City will feature the extraordinary achievements of African Americans on Facebook, Twitter, and Instagram. The Mayor said if you don’t currently follow City government on social media, you should start in order to enjoy this important history lesson. Follow the City on:

Black History Month will play a prominent role on Saturday, February 15 as the City celebrates the $2.8 million renovation of its only community center, named in honor of civil rights, education, housing and anti-poverty leader William “Hicks” Anderson. The center, located at 501 North Madison Street, has been completely renovated and features a refurbished gym, aquatic center, game room, kitchen, technology lab, and dance studio. Residents are invited to a re-opening party from Noon through 6 p.m. featuring tours of the facility, food and refreshments and giveaways along with presentations about Black History.

Then on Friday, February 28, the special month-long celebration concludes with the 2nd Annual Historically Black Colleges and Universities Week Gala to be held at the Hotel DuPont on West 11th Street. The Gala opens the City’s annual celebration of HBCUs and leads up to HBCU Week and the HBCU College Fair held later in the year during which thousands of young people will have the opportunity to be accepted to an HBCU.

The agenda for the sold-out black-tie Gala includes a VIP and cocktail reception and awards dinner. Mayor Purzycki and Wilmington’s HBCU Ambassador Stephen A. Smith announced in December that the Gala will present awards to the following three individuals:

The HBCU Gala was born out of the HBCU Week initiative begun by Mayor Purzycki in 2017 with the assistance of Ashley Christopher, the City’s HBCU Program Manager. The mission of HBCU Week is to encourage high-school-aged youth to enroll at HBCUs, to provide scholarship dollars for matriculation, and to sustain a pipeline for employment from undergraduate school to corporate America. The purpose of the HBCU Gala is to raise money for HBCU Week, assemble HBCU supporters, and honor individuals who have demonstrated a significant commitment to HBCUs and to Wilmington’s HBCU programs.