Travel Restrictions for “A” Street in South Wilmington

Wilmington’s Department of Public Works announced today that, starting Monday, March 9th, A Street from South Walnut Street to Heald Street will be closed to through-traffic for nearly two months. A Street is planned to reopen on April 27th.

The street is being closed due to infrastructure work related to the new South Wilmington Wetlands Park in Southbridge. Specifically, the work involves the excavation of a large portion of the street to construct a utility vault, install two new manholes and associated piping, and relocate a 12" waterline.

Vehicular traffic will have access to properties from 300 through 701 A Street from South Walnut Street, while properties at 800 to 1120 A Street, as well as Townsend and Buttonwood streets, will be accessible from South Heald Street. Pedestrian access will be maintained along the north side sidewalk throughout the closure. A graphic of the area affected by this closure is presented as part of this news release.

Signage will direct motorists in the work area. Flaggers will be on-site directing traffic as needed. Motorists should adopt a new travel route plan for the duration of the project.

For more information about this and other road closures in Wilmington, please access the new real-time map that is updated daily on the City’s website. 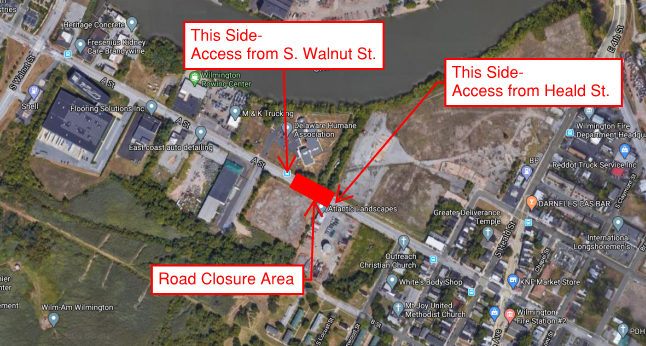