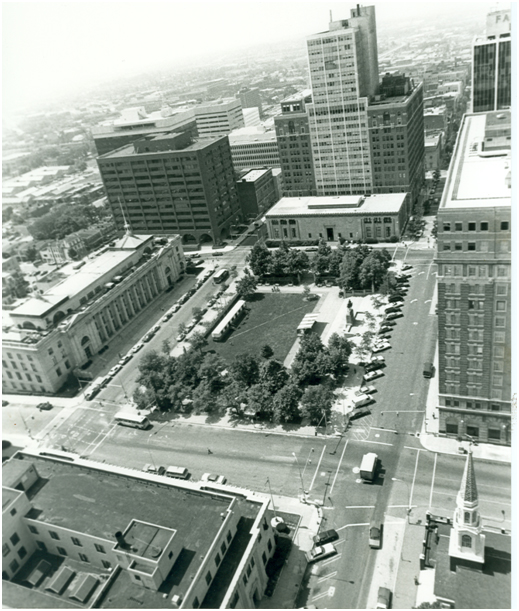 Rodney Square has been considered as the heart of downtown Wilmington since th  e early 20th century, when the DuPont Company began to realize their long-range plans for this part of the City. Beginning with construction of their new headquarters in 1905, the company used their extraordinary vision, community influence, connections and financial investments to achieve an attractive and complete landscape by 1937.

Rodney Square is a unique example in Delaware of a collective public and private development venture that evolved out of the late 19th century City Beautiful movement, which sought to improve social order by including more beauty in the urban landscape. It is also a significant, unified collection of revivalist style architecture (including Italian Renaissance, Classical Revival, Beaux Arts and Moderne) designed for primarily public use. The Square has become the symbolic center of the City, providing open space and excellent architectural backdrops for a wide range of activities, both planned and casual. In 2011, the Rodney Square landscape and buildings, the Caesar Rodney Equestrian Statue and the Nemours Building were placed on the National Register of Historic Places. The district was recognized for contributions to community planning and development, and to civic architecture from the period 1905, with the purchase of the land for the DuPont Building, to the beginning of the final phase of the original construction of the Nemours Building in 1941.


Free viewers are required for some of the attached documents.
They can be downloaded by clicking on the icons below.